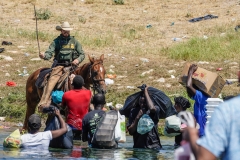 A Border Patrol agent on horseback uses the reins as he tries to stop Haitian migrants from entering an encampment on the banks of the Rio Grande near the Acuna Del Rio International Bridge in Del Rio, Tex. (Photo credit: PAUL RATJE/AFP via Getty Images)

Let’s see: Heroic horsemen rode to the rescue at Del Rio, Tex., along the U.S.-Mexico border. Republicans could’ve whipped the open-border Democrat degenerates with a first-principles case for sovereignty and self-defense, the thing Border Patrol horsemen were exercising so instinctively. Instead, the Right chose to beat around the bush, sweating the redundant details:

Who cares, when our border-patrol heroes—the last of the He-Men—were doing the work of the Lord! And, what on earth is wrong with the whip, in this context?

Did not the Lord teach—in The Book of Proverbs, through his emissaries—that, “He who spares his rod hates his son”? (In Hebrew: "חוםך שבטו שונא בנו") I believe Proverbs has a broader and deeper meaning: Libertine formative figures who fail to teach the young and the lawless right from wrong hate both their disciples and the society upon which they unleash them.

Let’s rewind: The reference is, as CNN put it, to “recent images that appear to show U.S. Border Patrol agents on horseback confronting migrants along the Rio Grande.”

“Videos taken by Al Jazeera and Reuters…show law enforcement officers on horseback using aggressive tactics when confronting migrants, who [were] largely Haitian, to prevent them from crossing into the U.S.”

So far so good.

The Biden Administration "expresse[d] horror,” promising to proceed aggressively against the poor horseback officers, who work in near-impossible conditions, without institutional support and for meager wages.

How does the Right respond? Republicans responded with a weak refrain: “Was it a whip or a rein?” they bickered. The horse-riding Border Patrol agents were wielding a rein, not a whip, was the sum of our side’s “case” in defense of our guardian agents.

That’s the anatomy of a typical Republican retort. It’s also why Democrats are the perennial winners.

There is only one winning—and correct—answer, in the case of the whip versus the rein, and it is this:

If it was not a whip, it ought to have been one, and if our Guardian Angel of the border used a rein as a whip—then hooray for him. The End.

That’s the Right’s problem. The anatomy of every single left-manufactured, network-news outrage sees our side always conceding to the legitimacy of the Left’s argument—accepting the premise of their gripe, arguing on their terms of debate. And then going on the defensive, instead of playing offense.

It is always the Democrats that set the terms of debate. Republicans simply internalize the rules of the game set by their masters, and then play a reactive, rather than a proactive, game, panting hard, mentally flaccid, and unfit.

The anatomy of a good response is never, never to apologize and equivocate about a principled behavior, licit in natural law, in this instance the right of self- and national defense.

Here is the correct response:

“So what if U.S. Border Patrol agents on horseback were wielding whips? Got a problem with repelling and whipping outlaws, who are charging you, charging your horse, and barging into your country?”

Vice President Kamala Harris called the images “horrible” and said she supports an investigation into the matter.

The horsemens' work was heroic, not horrible. The job of the law is to round up the likes of the Haitian invaders and turn them back. If the law is not doing this—it’s because natural morality has been inverted. Good is bad and bad is good. Right is wrong and wrong is right.

What a moral inversion it is to force U.S. law enforcement to process and pander to outlaw invaders, instead of stopping and expelling them in just the manner described.

While demonic Democrats deftly use the DOJ and the Security and Surveillance State apparatus and apparatchiks to demonize and destroy former President Trump and as many of his followers as possible—the GOP has been…writing letters.

The best Republicans can do for MAGA America is a letter. The world is flowing into the United States, no end in sight. Instead of showy, daily pressers, on-camera vigils at the open border, tough talk of impeachment for treason and a violation of the oath of office, lawsuits, state legislation—Republicans have raised the quill: They’ve been penning polite letters about the threat at the Southwestern border from potential terrorists. Not a word about irretrievable loss of country and sovereignty.

Listen to David Vance and Ilana Mercer bring “Hard Truth” to the border.