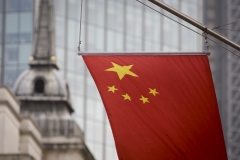 The Chinese flag hangs from a building. (Photo credit: In Pictures Ltd./Corbis via Getty Images)

China is all aboard the cause of “anti-racism” and critical race theory.

At least, China wants the United States to be all aboard.

In a video produced by China Global Television Network, which is a state-owned media company controlled by the Chinese Communist Party, two narrators talk about “how to teach about racism to your kids.”

Chinese state propaganda is virtually indistinguishable from the curriculum in many American public schools.pic.twitter.com/n2K0bU8kPb

The under-five-minute video explains that, among other things, “black people have gotten fewer opportunities than other people” and “racism is passed down from generation to generation.”

The whole thing is a stilted, poorly produced knockoff of a Robin DiAngelo lecture.

One line from the video is a particular laugher. A woman trying to teach about racism says: “It may be tempting to hide the news from kids but it’s better to tackle things head-on.”

This, from a country that more tightly controls information to its people and to the world than almost any other on earth.

Here, in year two of a pandemic that was unleashed upon the world as the result of the dishonesty of the Chinese regime, we are being given a lecture about how we need to tackle things “head-on.”

The video finishes with the lines, “being not racist just keeps things the way they are now. By being anti-racist, you can help lead our children to a brighter future.”

We can, at least, learn a few things from this video.

The final line of the video could be taken straight from Ibram X. Kendi, a darling of the woke, mainstream, left-wing media. This propaganda video is engaging in what one might call “concern trolling.”

No doubt, China is deeply concerned about racism in America and it’s just trying to help make the world a better place, right?

During the Cold War, the Soviet Union was eager to stoke and exploit racial division in the United States to cause as much chaos and damage as possible to its Western foes. This, even though its record on treating racial, religious, and ethnic minorities was generally appalling. Perhaps that just seems less bad in the Soviet Union because its treatment of pretty much everyone was atrocious.

Certainly, China uses similar tactics today. Glomming on to movements like Black Lives Matter to claim moral equivalence or even superiority to the United States.

This leads to the second conclusion one can draw from the video. It’s awfully rich to be getting a lesson about racism and racial tolerance from a country that is in the process of ethnically cleansing its population by force. The communist regime, as is now well-documented, has come under scrutiny for putting Uighur Muslims in concentration camps.

It is effectively committing genocide by forcing Uighurs into reeducation facilities and sterilizing women by force. They are also being used for forced labor.

Let that sink in.

A country currently using an ethnic minority as literal cotton-picking slaves while trying to eliminate them from existence wants to give the U.S. a lecture about racism.

The Chinese Communist Party wants us to know that by being anti-racist, we can be led to a brighter future as it ruthlessly pursues ethnic cleansing.

As with all dictatorial, totalitarian regimes, the truth in this case means absolutely nothing. Life under the Chinese regime means always living by lies. It wants us to live by those lies, too, or else.

If we can assume that the Chinese Communist Party puts out propaganda videos to promote the good of the party, then it’s noteworthy it enforces ethnic and cultural unity in its own country at the end of a gun, while enthusiastically promoting wokeness and racial division in America using the language of the modern left.

Maybe this should make us think about how China fears genuine American strength, which comes through patriotic assimilation, unity, and the concept of e pluribus unum. That certainly won’t come at the end of a gun in this country. It comes through reinvigorating ideas that Americans most fully embraced not long ago.

That is the legacy of 1776 and the generation of Americans who came before us who made this country great.

China would clearly be happy to see that never return.