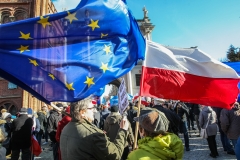 Flags for Poland and the European Union fly at a protest. (Photo credit: Michal Fludra/Contributor/Corbis News via Getty Images)

Across the pond, Poland and the European Union find themselves deadlocked over a question about judicial primacy. In early October, Poland’s Constitutional Tribunal sparked controversy when it ruled that EU law does not supersede national legislation.

At stake in the EU-Poland legal dispute, was Poland’s decision in 2018 to rein in its judiciary and establish a disciplinary chamber to remove judges. Before these reforms were undertaken, the Polish judiciary was largely viewed as corrupt and inefficient, possessing vestigial features of the previous communist order, when Poland was a member of the Warsaw Pact. What initially started out as a mundane domestic reform soon transformed into an international controversy.

The European Court of Justice (ECJ) took exception with Poland’s reforms and ruled that EU law takes precedence over Polish law. The ECJ’s ruling did not deter Poland, though. Back in March, Polish prime minister Mateusz Morawiecki brought the case before the Polish Constitutional Tribunal, subsequently leading to the Polish tribunal’s controversial ruling in October. Following the October ruling, the EU commission had choice words for Poland’s superior court and reaffirmed its EU-law-über-alles stance.

Possessed by a universalist spirit, the EU ramped up the pressure on Poland by slapping it with a daily fine of €1 million euros (slightly over $1.1 million) until the Law and Justice (PiS, Prawo i Sprawiedliwość) government modifies its judicial legislation to align with EU standards.

The Poles remain intransigent. They know what is at stake. Having gone through a series of partitions in the late eighteenth century in addition to being placed under the Soviet Union’s thumb via the Warsaw Pact in the twentieth century, Poles’ skepticism toward supranational entities and hostile external actors is justified. The former Soviet satellite will not compromise on its sovereignty both as a matter of principle and national identity.

The current tension between Poland and the European Union offers a glimpse of the new kinds of struggles nation-states are confronting in contemporary times. The erosion of national sovereignty is becoming the norm throughout the West as governments grow and political planners find every way possible to build superstates. The EU represents the most significant trial run of such a utopian project. Despite its failed attempts to create a United States of Europe so far, Eurocrats remain committed to their fantastical vision.

The biggest obstacles central planners in Brussels face are the former Soviet satellite states, which have grown skeptical of the EU’s pie-in-the-sky project for the Old Continent. As the largest member of the Visegrad Group, Poland has established itself as an opposing pole to Brussels-style globalism.

Poland’s judiciary reforms are part of a broader set of populist measures that span restricting the resettlement of Middle Eastern migrants within Europe to standing up for traditional cultural norms that have irked the bien-pensants all the way from D.C. to Brussels. For its defiance of conventional Western political norms, Poland has earned the illiberal democracy label, accompanying its fellow Visegrad Group member Hungary in receiving this dubious distinction.

The curious thing about Poland’s fracas with the EU is that Poland doesn’t want to leave the EU, at least not for now. According to various Polish polling firms’ findings, support for leaving the EU has never exceeded 20 percent. Since joining the EU in 2004, Poles have generally held the supranational union in high esteem. Further, Poland heavily relies on intra-EU trade for its exports. Trade with EU members accounts for 80 percent of Polish total exports. Even Prime Minister Morawiecki reiterated that a “Polexit” is not in the cards at the moment.

However, political intentions can change. Eurocrats fail to recognize that the EU’s initial popularity was predicated on reasonable benefits such as free trade between member states, liberalized travel within the EU, and greater diplomatic integration to prevent the kinds of fratricidal wars that devastated the Old Continent during the first half of the 20th century. The 2016 Brexit vote showed the world that the EU’s power is not yet monolithic and that with the right amount of political will, EU member states can go their separate ways.

The more the EU micromanages Polish internal affairs and punishes Poland for the simple act of exercising sovereignty, the more likely it is to entertain the idea of exiting the EU altogether — a potentially devastating blow to the Eurocrats’ quixotic political project.