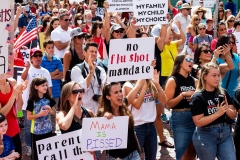 Hundreds of people of mixed political views, religions, and cultures protest a mandate from the Massachusetts governor requiring all children age K-12 to receive an influenza (flu) vaccine/shot to attend school for the 2020-2021 year. (Photo credit: JOSEPH PREZIOSO/AFP via Getty Images)

Dear skeptical Americans: You have every right and reason to be hesitant about rolling up your sleeves and submitting to flu vaccine jabs this year.

The public health-industrial complex bureaucrats who have flip-flop-flipped on universal mask-wearing during this COVID-19 chaos are the same ones now pushing universal flu shots. Assurances about the safety and efficacy of seasonal influenza immunization should be taken with a boulder of salt. The actual scientific literature, as opposed to government-promoted propaganda, shows that safety and efficacy evidence is lacking on all fronts across all age groups.

Even more alarming: While gullible journalists regurgitate panicked talking points about a "twindemic" of COVID-19 and flu this fall and winter, scientific data suggests that taking the flu shot may increase the risk of influenza or other non-influenza respiratory viral infections.

Just four months ago, a study published by the Evidence-Based Medicine, Public Health and Environmental Toxicology investigated whether the seasonal flu vaccine played a role in increasing COVID incidence and mortality.

"We found statistically significant positive correlations between" the vaccination coverage rate and reported COVID-19 incidence, "as well as mortality for Europe and the USA," the team reported. "A statistically significant positive correlation was also found between the VCR and the COVID-19 case fatality rate (CFR) for Europe....Our analysis indicates that receiving seasonal influenza vaccination(s) in the past might be an additional risk factor for the elderly in terms of enhanced susceptibility to infection with SARS-CoV-2 and higher likelihood of a lethal outcome in case of infection. More research about this possible risk factor is urgently needed."

But as always, Feckless Anthony Fauci casts his public health pronouncements as unassailable moral imperatives. (Remember: First, it was selfish to wear a mask because health workers needed them more than the rest of us did during shortages — and they didn't do anything to protect the wearer, anyway. Then, it was selfish not to wear a mask because we "have to do our part to stop the spread of COVID" — even though there is still no scientific support for universal mask mandates.) Well, Fauci now tells us that we all need flu shots because it's "our personal responsibility to protect ourselves," but also "the vulnerable around us, including young children, pregnant women, adults 65 years of age or older, and those with underlying chronic health conditions."

What Fauci won't tell you: Health care workers have for years objected to mandatory flu shots, citing several meta-analyses by the respected Cochrane Collaboration and studies by other mainstream researchers showing weak or no evidence that vaccinated workers are less likely to transmit the flu virus. In fact, after publishing an analysis of 50 controlled studies of flu shots in healthy adults, the Cochrane Collaboration in 2010 found only "modest" benefits of reducing flu symptoms and concluded that there was "no evidence" that the shots affected flu complications such as pneumonia. The independent Cochrane researchers slammed the Centers for Disease Control and Prevention for ignoring the "quality of the evidence" and instead quoting "anything that supports their theory."

The Cochrane Systematic Reviews, the gold standard for evidence-based scientific analysis, studied flu shots in children and found that "little evidence is available for children younger than two years of age." Moreover, its researchers noted in 2012, "it was surprising to find only one study of inactivated vaccine in children under two years, given current recommendations to vaccinate healthy children from six months of age in the USA, Canada, parts of Europe, and Australia." Six years later, the Cochrane team found there was still not enough data to determine the effect of vaccination on school absenteeism and parental work absenteeism. And the effect of repeat flu shots on kids, the team concluded, was "uncertain."

As for pregnant women: In 2017, a study conducted by the CDC itself and published in the peer-reviewed journal Vaccine, reported an association between repeated flu vaccination and miscarriages. The results confirmed an earlier 2013 study published in Human & Experimental Toxicology that uncovered a flu shot-miscarriage link in women who received both the seasonal and the pandemic H1N1 flu shot during the 2008-2009 flu season. Earlier research hypothesized that a "synergistic fetal toxicity" might have resulted from receiving both pandemic and seasonal flu shots.

Independent journalist and researcher Jeremy R. Hammond, who has meticulously documented peer-reviewed scientific analyses of flu shot impact on children, pregnant women, and the elderly, rightly summarizes the push for mandatory flu shots (now a reality for schoolchildren in Massachusetts) as a "mass uncontrolled experiment" without informed consent. How much longer will you be a guinea pig? Just say no to the flu shot bullies and ask this question:

Where are the "My body, my choice" zealots when you need them?