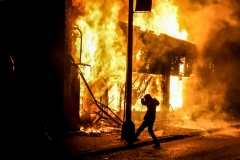 Ready or not, here they come. The ground troops of the anti-Donald Trump resistance aren't just biding their time until Election Day for Hidin' Joe Biden. Hell no. They're making their direct action checklists and checking them twice. They're training for instigating.

No matter the outcome at the ballot box, the left-wing mob is prepared to disrupt and destroy nationwide in the name of preserving "democracy."

Four weeks ago, I exposed the pot-bangers and lawn-crashers of the Sunrise Movement. That's the constantly morphing, full-time front group for the Sierra Club that nurtures rent-a-rioters to agitate for everything from the "Green New Deal," to Black Lives Matter and the "defund the police" movement, to the attacks at private homes of Senate Republicans -- who just delivered the confirmation of Supreme Court Justice Amy Coney Barrett. Another key social justice player, ShutDown D.C., is teaming with Sunrise Movement guerilla warriors to mobilize students, community organizers, and even federal employees to take to the streets on Nov. 3.

ShutDown D.C. anticipates that 10,000 protesters from a motley assortment of affinity groups will converge at Black Lives Matter Plaza to engage in "civil resistance" if President Trump tries to "steal the election." A "Flying Bike Squad" is "coming together as a rapid response team," according to organizers. If it's anything like the skateboard squads and soup can squads who've used everyday items as weapons to beat Trump supporters, look for more blood to spill in the name of "peaceful protest." Mass disruptions are planned at train stations and airports, on highways and in residential neighborhoods for at least the first full week after Election Day.

"We'll keep it going until Trump concedes," ShutDown D.C. threatens in its outline of a "No More Business As Usual" blockade across the country. "We could be in the streets throughout the fall and into the winter -- maybe as lots of rolling waves of action or possibly as a few major tsunamis! In other parts of the country, as vote counts conclude, our focus will turn from protecting the vote counts to themselves being ungovernable."

Here's what has me especially concerned: The "deep state" Trump-haters are openly gearing up to do everything they can from inside the federal government to assist the resistance. ShutDown D.C. is conducting online training this week with public employees in the nation's capital to undermine election integrity and the day-to-day work of the Trump administration. A protest guide lists the following subversive federal worker groups as key partners: Takoma Park Mobilization, Alt National Park Service, Alt Ed, AltFDA, Alternative NOAA, Alt U.S. Forest Service, AltEPA, and BadHombreLands National Park Service.

The ShutDown D.C. crew is schooling its forces in intentional slowdowns to "reduce the pace" of activities they oppose ideologically and on how to participate in "nonviolent direct action protests/rallies" (which serve as cover for violent riots and assaults by Antifa and Black Lives Matter brethren). Another tactic: "Fed Flu" actions by U.S. government workers to "coordinate sick days across workforces." More "tools in the toolbox" of "Never Trumpers" employed in federal police enforcement, research and development, the U.S. Armed forces, administrative management and political appointments:

Are federal authorities as locked and loaded as are these shutdown infiltrators? Is the Trump administration ready to purge these infiltrators from the bowels of the federal bureaucracy before it's too late?

I'll repeat my warning from four weeks ago: They may look and sound like pesky, snot-nosed toddlers having harmless temper tantrums in black pajamas (and three-piece suits). But these professionally organized punks provide obstructionist boots on the ground for globalist Democratic billionaires and strategic cover for their violent Antifa and Black Lives Matter comrades. Wake up and smell the manufactured chaos.