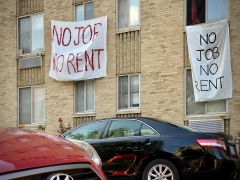 Banners against renters eviction reading "no job, no rent" is displayed on a controlled rent building in Washington, D.C. (Photo credit: ERIC BARADAT/AFP via Getty Images)

American workers across the wage scale are hurting. Small-business owners across the country are fighting for their survival. Young people face more uncertainty than ever about their futures and ability to put food on the table.

As we head into Labor Day weekend, I would like to offer a friendly reminder from the "America First" right to the Beltway Republican message machine and the Trump campaign's social media mavens: Now is not the time to be cheerleading for pandemic profiteers, tech billionaires, and "woke capital" globalists who are addicted to cheap foreign labor and abhor American sovereignty. According to one analysis by Oxfam, 17 out of the top 25 most profitable U.S. corporations — including Microsoft, Johnson & Johnson, Facebook, Pfizer and Visa — are projected to rake in $85 billion more in 2020 than in previous years as upward of 40 million Americans are out of work.

SwampCons keep touting the "booming stock market" and "record" S&P 500 highs. President Donald Trump himself bragged last week, "NASDAQ has broken the record, I think 16 times already, during a pandemic." He also warned Republican National Convention viewers that Joe Biden is bad for our "retirement" nest eggs and "401(k)s." True enough. But what about the tens of millions who've lost their jobs and those who haven't even had the chance to start putting away any savings?

Moreover, why should any "Make America Great Again" populists wave pom-poms for Microsoft, Apple, Amazon, Google/Alphabet, and Facebook? The founders, top executives, and elitist employees of these Silicon Valley firms — the top five companies in the NASDAQ index — hate America, sabotage U.S. workers through advocating for mass migration, Black Lives Matter and Antifa anarchy, and they openly disparage and discriminate against Trump-supporting customers.

In ordinary times, I used to be one of those reliable voices touting the "free market," "invisible hand," and miracles of American capitalism over "socialism." But our current condition is not one of "limited government conservatism" vs. "big government socialism." As I've illustrated all summer long, we live in a bloody state of anarchotyranny. The lawless reign while big business collectively allies itself with the mob to reap profits at the expense of the law-abiding.

Back in February, I reported to you on the myth of the American worker shortage by spotlighting more than 50 stories of tens of thousands of recent U.S. worker layoffs in tech and other high-skilled industries. Among the U.S. corporations and institutions responsible for laying off, replacing, offshoring, and outsourcing tens of thousands of American jobs:

—Even as it crowed about record quarterly sales, Salesforce handed out pink-slip notices to 1,000 of its employees.

—Despite promising not to cut workers in the midst of the COVID chaos, Morgan Stanley, Bank of America Corp. and Wells Fargo are now all considering doing just that.

—In Florida, more than 1,900 hotel employees are facing layoffs or temporary layoffs at Loews Hotels and Co and Marriott.

—Telecom giant Cisco plans to lay off an unspecified number of workers amid business troubles.

—Manufacturing giant 3M slashed 1,500 jobs at the beginning of the month.

—Walmart laid off hundreds of employees in its logistics, real estate, and retail location planning departments over the past two months.