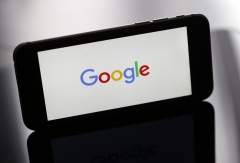 The Google logo is displayed on the screen of an iPhone. (Photo credit: Chesnot/Getty Images)

The mainstream media is slowly catching on to the "Open Borders, Inc." racket. Just this week, NBC News reported that smugglers are using Facebook to advertise their services in violation of Facebook's policy ban on human exploitation and trafficking. The news network appears shocked, shocked, shocked that coordinated illegal activity is booming on Facebook — one of the world's biggest and most influential globalist platforms.

Maybe if the bleeding-heart libs in the Fourth Estate hadn't been so busy carrying water for Mexican cartels and Big Business through endless anti-Trump propaganda pieces defending the mass illegal immigrant invasion over the past four years, they might have blown the whistle sooner on Silicon Valley's co-conspirators with ruthless coyotes.

Only now has NBC News seen fit to enlighten the public about Spanish-language posts on public Facebook pages advertising "Travel to Mexico to the United States. Costs $8,000. 100 percent safe" or "Make your dream a reality in the United States. We are here to help you. The journey is safe and reliable and the price is $4,500 leaving from Monterrey to San Antonio, Texas."

That's the tip of the iceberg. In 2019, I reported how smugglers and their clients worldwide have used Facebook and WhatsApp (owned by Facebook) to coordinate their journeys. Pueblo Sin Fronteras, the most notorious sponsor of illegal immigrant caravans, still maintains a public Facebook page where its leaders taunt America, announce their border-breaching activities and post solicitations for supplies and donations.

Nongovernmental organizations, advocacy groups, and financial institutions have created an additional array of free apps to "help." The U.N.'s International Organization for Migration offers MigApp on Google Play and Apple's App Store with information and "assistance to migrate safely." The app features weather and crime alerts, medical clinic appointment scheduling and money transfer services (more on that in a moment).

Similarly, the International Committee of the Red Cross's WhatsApp alerts provide "advice on how to avoid and prevent accidents, illness, and being separated from family members," as well as a means "to share the geolocation of a shelter or send specific advice or alerts in the event of unexpected situations."

United We Dream's "Notifica" app is also available on Google Play and the Apple App Store. It gives illegal immigrant travelers a "help button" to alert friends, family, lawyers, media propagandists, and others in case of detention or encounters with law enforcement.

Border saboteurs have used technology for decades to help undermine immigration enforcement. Ricardo Dominguez created a crowdsourced website-jamming network in the 1990s called the FloodNet system, which allowed anyone with an Internet connection to interfere with the communications of the U.S. Border Patrol, White House, G8, Mexican embassy, and others. He then introduced the Transborder Immigrant Tool in 2009, using cheap $30 Motorola cellphones equipped with a free GPS applet to help illegal immigrants navigate desert routes, locate water stations, and determine their proximity to highways. An expert consulted by the U.N. High Commissioner for Refugees lauded "how smartphones and social media have revolutionized" migration, allowing illegal immigrants to bypass "legal means" of finding agents that "take a long time" and instead use the "dark digital underworld" for "facilitating access to agents and smugglers" through encrypted Facebook and WhatsApp channels.

Add to all this a new boom of peer-to-peer apps that facilitate illegal immigrant money transfers known as "remittances." In 2017, the aggregate cost of sending remittances was about $30 billion. Old-line money transfer operators charge steep fees averaging about 7% of the amount sent. Among the plethora of competitors and disrupters jockeying in the migrant money market to peel away customers with lower transaction fees are Wells Fargo, MoneyGram, Paypal/Xoom, Wise, and WorldRemit. Many of these apps integrate with Facebook's Messenger Chat, Viber, and WeChat. WorldRemit, a start-up founded by a Somalian former United Nations official with venture capital backing from Facebook, Spotify, Netflix, and Slack, is closing in on 600,000 transfers per month, according to Fast Company.

Just to make Silicon Valley's allegiances clear: Apps owned or backed by Facebook, Google, and Apple that aid and abet illegal immigration and human smuggling operate with impunity, while those same globalist companies have banned law-abiding, free-speech apps such as Gab and Parler. Untold thousands of nationalists have been deplatformed for defending our homeland, while cartels and coyotes exploit the Internet and corporate oligarchs' cheap labor appetites to sabotage our borders and attack American sovereignty.

Who needs foreign enemies when domestic blind worship of the "free market" is destroying us from within?