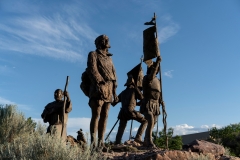 If you support the Second Amendment, oppose mob anarchy, and reject the monumental madness gripping America, then you stand with Steven Baca.

If you have been outraged by the persecution and prosecution of brave patriots across the country defending their homes, their families, our downtowns, our national heritage, and history — like the armed St. Louis couple, or the armed pregnant Michigan mom, or the armed citizens in the Fishtown suburb of Philadelphia, Boise, Idaho, and Provo, Utah, facing down the saboteurs of civil order, then you stand with Steven Baca.

On June 15, Steven and several other friends and neighbors gathered peacefully at Tiguex Park in Albuquerque, New Mexico, to protect a statue of Spanish conquistador Juan de Onate targeted by agitators identified as Black Lives Matter protesters. What does Onate have to do with St. George Floyd or any of the other clients of race hustler Benjamin Crump? Nothing. The coordinated violence and chaos unleashed by a toxic convergence of BLM, Antifa, jobless college students, and garden-variety cop-haters have nothing to do with black lives. Or with "justice." Or police brutality. Or equality.

It's all about making money, securing power, and reimagining this nation by eradicating every vestige of the settlers, pioneers, colonizers, and founders who made America America.

Esther Rivera, a 14th-generation mixed Hispanic and Native American grandmother from Albuquerque, showed up to guard the memorial.

"I wasn't there to protest," she told me. "I was there to pray for peace and the preservation of these statues and preservation of historical art....If we start pulling these down and renaming buildings and burning books, that's fascism."

During the melee at Tiguex Park, as agitators wielded pickaxes and strapped chains to the Onate statue, several belligerent women verbally assaulted Rivera. Some screamed falsely that she was a cop, stirring anger among the cop-hating BLM mobsters. In several videos of the toppling of the Onate statue, at least two of the thuggish protesters can be seen laying hands on Rivera. She told me one woman tried to steal her phone. As she was pushed to the ground, Baca tried to rescue her. A swarm of women blocked Baca and multiple videos show him trying to peel the women off of him and Rivera. He was a defender, not an aggressor.

Then the scene turned uglier. As the savages ripped the statue from its pedestal, unidentified assailants screamed falsely that Baca was a cop.

Baca can be seen retreating from the crowd, separated from Rivera. He ran into the street, where several rioters beat him in the head and body with a large longboard and other unidentified objects. At least one video appears to show an assailant wielding a switchblade or knife.

That is when Baca drew his weapon and fired several shots at his attackers. Initially charged with felony aggravated battery with a deadly weapon, Baca was held in jail for a week before the Bernalillo County district attorney Raul Torrez dropped that charge.

Baca's justified self-defense is plain as day to anyone who watches the videos.

CHARGES DROPPED: Remember the story about an armed citizen that shot an Albuquerque rioter Scott Williams in self defense? The charges have now been dropped against Steven Ray Baca. Baca had tried to stop rioters pulling down a statue. pic.twitter.com/h3xThEmVJQ

Here's the thing: This story is far from over. Baca still faces potential reintroduction of the felony weapons charge, as well as aggravated battery charges involving three women — none of whom have come forward, none of whom the D.A. has located, and all of whom can be seen on camera laying hands on Baca and Rivera first.

Here's another thing you need to know: Torrez is not just any run-of-the-mill D.A. He's one of dozens of George Soros-subsidized subversives who could put "social justice" above equal justice. A Soros front group called the "New Mexico Safety & Justice" PAC — pro-criminal, pro-rioter, anti-cop, anti-Second Amendment — dumped more than $107,000 into Torrez's campaign in 2016.

Tim Keller, the Albuquerque mayor who has spent the past eight weeks pandering to BLM, defamed Baca as the agitator. The head of the police union, however, condemned city leaders for creating an "operations plan" that tied the hands of cops, who were "spat upon" and had rocks thrown at them as they tried to secure the riot and crime scene.

I had the privilege of meeting Steven this Independence Day weekend. He is a gentle soul, overwhelmed by his predicament but grateful for the outpouring of grassroots support.

"We now have to wait for the district attorney to complete the investigation. We do not know how long this will take," he told me. "I stand ready to have my conduct and the conduct of others at the protest fully and thoroughly reviewed."

I have created a crowdfunding campaign for Steven Baca that can be accessed here.

This isn't just one statue and one armed American's freedom at stake. If you believe in the sacred right of self-defense and the sovereignty of our nation, then we are all Steven Baca now.