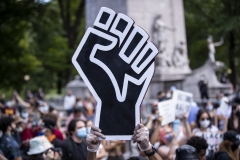 It's springtime in America. In halcyon days, we'd ring in the new season with fresh starts and fragrant flowers. But in 2021, the arrival of April now ushers in yet another cycle of destructive urban riots — stoked and coddled by toxic journalists downplaying left-wing violence and demonizing all who dare call out the ruinous, race-based chaos for what it is.

On Monday, as vandals and looters tore apart Minneapolis again in the wake of a cop-involved shooting, a suburban police chief tried to report on the dangerous conditions outside his station.

"Just so that everybody's clear, I was front and center at the protest, at the riot," Brooklyn Center (Minn.) police chief Tim Gannon told the media. He was there. They were not. This did not, however, deter the know-it-alls from castigating Gannon for using the word "riot." Cue the collective outrage and the ululations of the aggrieved.

"Don't do that!" one journalist exclaimed. "There was no riot," another propagandist retorted. "It was not a riot!" another indignant media wag chimed in.

Gannon did what reporters are supposed to do: Report. In a rare show of public courage by an elected official in these hellish days, Gannon remained undeterred. Several officers were injured, 40 demonstrators were arrested, and 20 businesses were invaded and robbed.

The officers that were putting themselves in harm's way were being pelted with frozen cans of pop, they were being pelted with concrete blocks. And yes, we had our helmets on and we had other protection and gear, but an officer was injured, hit in the head with a brick...so we had to make decisions. We had to disperse the crowd because we cannot allow our officers to be harmed.

Outraged journo-activists apparently disagree. These same types of professional word massagers who bark at police not to call riots "riots" are the same types who've been calling the deadly conflagrations of every major American city since George Floyd's death last May "mostly peaceful protests." Our airwaves and newspaper pages have been saturated with loaded language and warped narratives about every high-profile police encounter exploited by Black Lives Matter and Antifa from George Floyd to Ahmaud Arbery to Jacob Blake and now Daunte Wright.

Not only are these "protests" immune from criticism about their violent criminal nature, but they are also miraculously immune from COVID-19. When citizens in flyover country have gathered to resist lockdowns and mask mandates, the national media pounces on these peaceful protesters as selfish, reckless menaces to public safety. When inner-city thugs burn down auto repair shops, firebomb courthouses and police precinct offices, cart off diapers from Walgreen's, and raid liquor store shelves in the name of social justice, pandemic paranoia and condemnatory headlines suddenly evaporate.

Rigged media coverage. Rioters run amok. The threat of violence hanging overhead like thick cumulonimbus clouds. How is it possible for anyone accused in a riot-triggering incident from obtaining a fair trial? In a remarkable act of self-delusion, the presiding judge in the ongoing trial of former Minneapolis police officer Derek Chauvin rejected a defense request to immediately sequester the jury in the aftermath of this week's new bumper crop of riots. Stating the gobsmackingly obvious, defense attorney Eric Nelson argued that the violent outbreaks would be at the "forefront of the jury's mindset."

Judge Peter Cahill, however, shrugged off the threats and ruled that the jury doesn't need to be shut off from media and social media exposure until closing arguments begin next Monday. Never mind the barricades and barbed wire outside the fortified courthouse. Never mind the half-billion dollars in damage already done by George Floyd's vigilantes. Never mind the blaring, front-page stories about shopkeepers preparing for bloody chaos if the jury doesn't rule the "right" way.

Instead, Cahill nonchalantly advised the jury to simply avoid the news during the trial. Sure, just ignore the acrid smell of anarchotyranny permeating the air. Take no notice of wall-to-wall coverage of Gannon's resignation Monday afternoon after he pushed back against the media. Pay no attention to the journalists raging at police officials calling out rioters. Tune out the black-clad militants screaming "All Cops Are Bastards" and "No Justice, No Peace." Pretend away the pretrial publicity and nightly news jeremiads from racial demagogues Al Sharpton and Benjamin Crump painting Chauvin as an evildoer on par with Ted Bundy or Adolf Hitler.

With the media acting as relentless co-prosecutors and character executioners, the well of fair and impartial jurors who can weigh evidence without fear of retribution has been irreversibly poisoned. Like Minneapolis, Brooklyn Center, Portland, Los Angeles, Baltimore, Detroit, St. Louis, Ferguson, and so many other cities before them, the Fifth and Sixth Amendment rights to an impartial jury, fair trial and due process have all gone up in choking flames. This is what the twilight of a once great and free country looks and smells like.