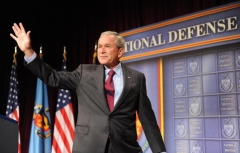 President George W. Bush ordered U.S. troops to Afghanistan shortly after the 9-11 attacks on the U.S. (Photo by TIM SLOAN/AFP via Getty Images)

President George W. Bush stood before the U.S. Capitol in 2005 and delivered an Inaugural Address in which he declared his utopian vision that the United States had a mission to change the world.

He was wrong. History has now proved it.

"The survival of liberty in our land increasingly depends on the success of liberty in other lands," Bush said. "The best hope for peace in our world is the expansion of freedom in all the world."

"So, it is the policy of the United States," he said, "to seek and support the growth of democratic movements and institutions in every nation and culture, with the ultimate goal of ending tyranny in our world."

One place Bush was referring to then was a place America was — and still is (for now) — at war: Afghanistan.

Two decades ago, our country had an indisputable justification for war in Afghanistan. Its Taliban government had provided sanctuary to al-Qaida in the lead-up to the Sept. 11, 2001, terrorist attacks.

The U.S. military swiftly forced the Taliban out of power in Kabul, and Osama bin Laden, the leader of al-Qaida, went into hiding in Pakistan.

On May 1, 2003, then-Defense Secretary Donald Rumsfeld went to Kabul and declared that "we're at a point where we clearly have moved from major combat activity to a period of stability and stabilization and reconstruction and activities."

"The bulk of this country today is permissive; it's secure," Rumsfeld said.

But then he added a caveat.

Two years after that, Bush delivered that Inaugural Address where he unilaterally declared America's "goal of ending tyranny in the world."

Six years after that, U.S. Navy Seals stormed a bunker in Abbottabad, Pakistan, and delivered justice to Osama bin Laden.

Now move forward another nine years. Had Afghanistan become a land of liberty by 2020? No.

"Conversion from Islam to another religion is considered apostasy, which is punishable by death, imprisonment, or confiscation of property, according to the Sunni Islam Hanafi school of jurisprudence," said the State Department report on religious freedom in Afghanistan released last year. "The constitution states the Hanafi school of jurisprudence shall apply 'if there is no provision in the constitution or other laws about a case.'"

"According to international sources," it said, "Baha'is and Christians lived in constant fear of exposure and were reticent to reveal their identities to anyone."

Meanwhile, the Taliban still controls some Afghan territory, and the Islamic State and Levant-Khorasan Province now terrorizes — even in Kabul.

"Some areas of the country were outside of government control, and antigovernment forces, including the Taliban, instituted their own justice and security systems," said the State Department's 2020 report on human rights in Afghanistan.

"ISIS-Khorasan (ISIS-K), an affiliate of ISIS and a U.S.-designated terrorist organization, continued to target and kill members of minority religious communities, and the Taliban again targeted and killed individuals because of their beliefs or their links to the government," the State Department said in its religious freedom report.

In August 2019, for example, "ISIS-K attacked a wedding hall in a predominantly Shia neighborhood of Kabul, killing 91 persons and wounding 143 others," said the State Department.

In March 2019, according to the department, "Media reported the Taliban killed a pregnant woman and her unborn child ... for allegedly calling the Taliban's war against the government 'illegitimate.'"

On Nov. 2, 2020, "Three ISIS-K militants carried out an attack on Kabul University with firearms and explosives, killing at least 22 people and wounding 22 others," the lead inspector general for Operation Freedom's Sentinel stated in his latest report.

In negotiating the U.S. plan to withdraw our forces from Afghanistan in May of this year, the Trump administration dealt with the Taliban — not the Afghan government. This month, President Joe Biden stated that his administration would follow through on Trump's agreement and "begin our final withdrawal" from Afghanistan on May 1.

Seventy years ago, the great diplomat George Kennan warned America against fighting wars to advance a moralistic vision rather than to prudentially protect the interests of the American people.

"In the old days, wartime objectives were generally limited and practical ones, and it was common to measure the success of your military operations by the extent to which they brought you closer to your objectives," he wrote in "American Diplomacy." "But where your objectives are moral and ideological ones and run to changing the attitudes and traditions of an entire people or the personality of a regime, then victory is probably something not to be achieved entirely by military means or indeed in any short space of time at all; and perhaps that is the source of our confusion."

Kennan was right. Bush was wrong. The strategic aim of our government ought to always be to protect and advance the liberty and security of this nation.