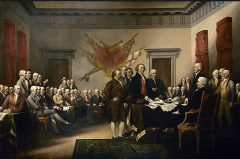 "Declaration of Independence" by American artist John Trumbull shows 42 of the 56 signers of the document.

All American politicians of the founding era share one thing in common with those of the current: Like all human beings, they are imperfect.

Rev. John Witherspoon, who signed the Declaration of Independence, uniquely expressed his own imperfection in his intolerance for the dramatic arts.

Born and raised in Scotland and educated at the University of Edinburgh, Witherspoon served for 23 years as a Church of Scotland minister in Beith and then in Paisley.

In 1755, when at Beith, a fellow clergyman wrote a play that was produced in Edinburgh.

"In Witherspoon's opinion," wrote biographer David Walker Woods Jr., "it was a serious breach of church discipline and an offense against the Christian religion for any one to countenance stage plays."

Witherspoon wrote a short book — "A Serious Inquiry Into the Nature and Effects of the Stage" — to explain his point.

"I will endeavor to shew," he wrote, "that public theatrical representations, either tragedy or comedy, are, in their general nature or in their best possible state, unlawful, contrary to the purity of our religion; and that writing, acting, or attending them, is inconsistent with the character of a Christian."

Witherspoon conceded some plays may have laudable elements but then concluded that such anomalies did not justify the existence of the theatre.

"It is not denied that there may be, and are to be found, in some dramatic performances, noble and excellent sentiments," he wrote.

But then he asked: "Whether it is possible now to find, or reasonable to hope to find, such a number of pieces, in their prevailing tendency, agreeable to the holiness and purity of the Christian character, as are necessary to support a public theatre?"

He did not think so.

"I could almost rest the whole argument upon it," he said, "that no man, who has made the trial, can deliberately and with good conscience affirm, that attending plays has added strength to his mind, and warmth to his affections, in the duties of devotion; that it has made him more able and willing to exert his intellectual powers in the graver and more important offices of the Christian life; nay, or even made him more diligent and active in the business of civil life."

Witherspoon argued, among other things, that it was unrealistic to believe plays could be good because of the corrupt nature of the people who watched them.

"And, therefore, while the great majority of those who attend the stage are unholy, it is certain that the plays which they behold with pleasure, cannot, upon the whole, but have a criminal tendency," he wrote.

"If any allege, that the poet's art may be a means to make religion amiable to them, I answer, that he cannot make it amiable, but by adulteration, by mixing it with something agreeable to their own taste; and then it is not religion that they admire, but the erroneous, debased, and false resemblance of it," he said.

"It is hard to tell what we may hope for in this age, but we insist that it ought to be abolished," Witherspoon said of the theatre. "Nay, we do hope to abolish it just as much as other vices."

Witherspoon made no reference to Sir Philip Sidney or William Shakespeare in this dissertation. But they had refuted him nearly two centuries before he took up his pen.

"(I)t is not rhyming and versing that maketh a poet," Sidney wrote in his Apology for Poetry. "But it is that feigning notable images of virtues, vices, or what else, with that delightful teaching, which must be the right describing note to know a poet by."

"The final end," Sidney said, "is to lead us to as high a perfection as our degenerate souls, made worse by their clayey lodging, can be capable of."

"I affirm, that no learning is so good as that which teacheth and moveth to virtue, and that none can both teach and move thereto so much as Poetry," he said.

Philosophers, by contrast, Sydney argued, tediously "teacheth what virtue is — and teacheth not only by delivering forth his very being, his causes and effects, but also by making known his enemy, Vice (which must be destroyed) and his cumbersome servant, Passion (which must be mastered), by showing the generalities that containeth it, and the specialities that are derived from it; lastly, by plain setting down, how it extendeth itself out of the limits of a man's own little world to the government of families and the maintaining of public societies."

But is that not precisely the lesson that Shakespeare taught in "Macbeth" — using poetry people read and watch to this day?

Yet had Witherspoon achieved his dream, Macbeth would never have taken the stage again — in Scotland.

In 1768, Witherspoon moved to America to become president of the College of New Jersey, which is now called Princeton.

Just eight years later, he was advocating for abolishing not the theatre but America's subservience to Britain.

"There is not a single instance in history in which civil liberty was lost, and religious liberty was preserved entire," he wrote in May 1776. "If therefore we yield up our temporal property, we at the same time deliver the conscience into bondage."

Two months later, he voted for the Declaration of Independence.

Terence P. Jeffrey is the editor in chief of CNSNews.com.

The liberal media are terrified of the truth, especially when it leads to uncomfortable questions about their own leftist worldview.

CNSNews covers the stories that the liberal media are afraid to touch. It drives the national debate through real, honest journalism — not by misrepresenting or ignoring the facts.

CNSNews relies on the support of our loyal readers to keep providing the news and commentary that matter to the American people, not just stories that prop up the liberal agenda.

Make a donation today. Just $15 a month would make a tremendous impact and enable us to keeping shining the light where the liberal media are afraid to tread.

Sign up for our CNSNews.com E-Brief to receive the latest news.