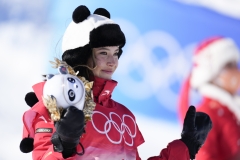 Beware of writing critical things about Eileen Gu, a teenage skiing triple-medalist at the Beijing Olympics. You'll be accused of racism.

Gu was born and raised in San Francisco, but after competing for the USA, she decided in 2019 that she was going to ski for Communist China, where her mother grew up. The most pronounced irony of this flip-flop is how she's cashing in by straddling the two countries.

During the games, NBC aired a gooey Gu profile. "She's made a massive imprint from social media to mainstream fashion...and has netted deals with global luxury brands like Louis Vuitton and Tiffany's." Gu has deals with over 20 other brands, including Chinese brands such as Luckin Coffee and Anta, the sportswear company that doubled down on its use of cotton from Xinjiang, calling concerns about forced labor there "lies."

CBN Data, a Shanghai-based research firm, estimated that Gu brought in 200 million yuan (or over $31 million) in 2021 — before her gold medal run. So it's quite likely she will make at least that much after the three Olympic medals.

But the Associated Press rushed to her defense under the headline "Navigating two cultures, judged by both of them." Oh, the poor dear. Her life is so rough.

"The frenzy to 'explain' Gu's choice reflects biases and misunderstandings in the United States about Asian American identity," wrote AP reporters Janie Har and Sarah DiLorenzo. "The stories about Eileen Gu are as much about the people telling them as they are about the athlete herself."

The AP duo energetically painted this multinational multimillionaire as a victim of white accusers. "Nonwhite immigrants and their descendants, in particular, face the double bind of being required to completely assimilate in order to be considered American, but also butting up against racist notions that prevent them from being accepted as truly American."

It's not a "double bind;" it's "double the opportunity for cashing in."

AP also found an expert to lecture Gu's critics: Russell Jeung, a professor "who has tracked the rise of hate incidents against Asian Americans and Pacific Islanders in the U.S. during the pandemic." As if Gu is suffering now from hate crimes?

Jeung claimed, "Part of the Eileen Gu perplexity is that the West is seen as superior and the East is seen as inferior. So why would she want to represent China?" Jeung claimed the hate criminals tell Asian Americans to "go back home," but now Gu is in trouble for not representing her home, "and so we lose either way."

Gu is winning in every way. She'll now be a supermodel/celebrity attending Stanford University, her mother's alma mater. She wins as she refuses to answer uncomfortable questions. Who's her American father? No answer. Was she allowed dual citizenship by the communists? No answer.

"Pretty normal people" don't make tens of millions. But she insists she has a "good heart."

If you raise questions about Gu failing to use her megaplatform to speak up for freedom in China, the AP duo has this retort: "And of course pundits in the U.S. have attacked her for competing for China, often in terms that further the persistent, racist othering of Asian Americans."