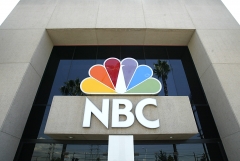 Displayed are the front of the NBC offices in Burbank, Calif. (Photo credit: HECTOR MATA/AFP via Getty Images)

In our new era of woke corporations, one obvious manifestation of their fear-based behavior arrives in TV advertising. They struggle to hit all the "right" notes to avoid controversy.

NBC is airing a new big-business sitcom called "American Auto," and on Jan. 25, they skewered all sides as the fictional auto company tortured themselves about being more inclusive of the "LGBTQIA community."

When some "roller rink in the boonies" bans a gay family, the Payne Motors team decides to tweet out a "rainbow square" in support. This backfires when a teenage black girl goes viral on TikTok, complaining, "Today, Payne Motors decided to do the bare minimum to show their support for the LGBTQIA community. Thank you, Payne, for saving the world by posting that rainbow square. Especially since all their commercials have one thing in common: Zero LGBTQIA representation."

So, the auto company brass panic and decide they need to reshoot a commercial that was finished to include lesbian moms. Frank, the commercial director, is supremely annoyed and gets all the conservative lines. (Wow, conservative lines. ) He asked if it was worth spending seven figures to "appease the woke mob." Obviously, yes.

At the reshoot, Frank declared, "I'm not on social media. Don't really need to get into arguments with liberal nutjobs about my white privilege." The company's public relations professional sarcastically replied, "Yeah, I'm sure the world is worse off for not having your hot takes, Frank." He shot back, "I'm getting breakfast. I might even get eggs with salsa, unless that's considered cultural appropriation now."

This is NBC, so then the CEO says, "Frank sucks, right?" The PR pro replies, "Very much so."

Then the CEO worried that the recast lesbians don't look "authentic," that they might read as sisters. "How much would it suck to get to the end and have people be like, 'Oh, hey, look, there's two families and a pair of platonic friends driving their kids home?'" She panicked over their outfits not looking lesbian, and then the costume assistant on the shoot told them, "I'm a lesbian, and I'd wear what they're wearing," so that's embarrassing.

There's just a parade of panicky decisions. They think that one of the "lesbian" actresses is actually straight, so they bring in an incredibly "butch" lesbian so it's obvious. They decide that the couples should be multiracial since pairing black with black and white with white is "pandering to segregationists." Then they rule men shouldn't be behind the wheel.

Then, Frank caused a new round of concern by noting that the black male they paired with a white woman is too light-skinned and might read as white. "If anything, you've just reduced the diversity in this thing."

One white male character summed it all up: "Are we finally allowed to say, like, woke culture has gone a little bit too far?" A black employee said, "Yeah, I don't think we're allowed to say that." The white man responded, "Absolutely not, then. Let's not say that. Carry on."

After hours of panic over the casting and losing the child actors due to their time restrictions, they end up filming the new minivan ad in the dark, without kids, making it "creepy." So, should they air it? The CEO concluded, "Might as well. No one watches commercials anymore anyway."

There's nothing inherently wrong with diversity in advertising. People of all races buy cars and eat burgers and need insurance. But you do get the impression from today's commercials that they've gone through all this tortured self-examination to avoid the wrath of the Woke Mob.