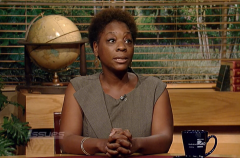 They haven't managed to kill the filibuster or ram through their federal election takeover (yet), but Democrats still have plenty of tricks up their sleeve to sabotage the vote. Their latest idea? Stacking the courts with wildly extreme political activists. While everyone's distracted with COVID and the pile of other crises this president has created, the White House is hoping to slip a who's who of radicals onto one of the most powerful courts in the country. And almost no one has noticed.

Nancy Abudu isn't a household name, but her employer -- the anti-Christian Southern Poverty Law Center (SPLC) -- certainly should be. The disgraced "civil rights" organization, whose fall from grace sent shockwaves through the leftist establishment a handful of years ago, turned out to be a hive of racist scam artists that exploited its donors, pretending to be America's "arbiters of justice." By 2019, when an ugly internal war went public, destroying SPLC's already fragile façade, it became clear to everyone that the so-called hate watcher was the biggest hater of them all.

Biden's pick for the 11th Circuit Court of Appeals was at the "poverty palace" when the mask was ripped off -- when men at the highest pinnacles of leadership were exposed as sexist, prejudiced crooks -- and yet she stayed. Since then, Abudu has been part of the rebuilding effort -- desperately trying to give SPLC some scrap of credibility to hold onto. Democrats must have been foolish enough to buy into their rehabilitation project if the president of the United States is willing to take a senior member from one of America's most disreputable organizations and give her a vote on our country's most important cases.

And while the SPLC's phony overhaul might have duped the media, the reality is, it's still the same old SPLC -- demonizing opponents, inciting violence, and attacking perfectly decent human beings like Ben Carson, a man they once labeled an "extremist." Abudu has been at the helm of that work where election subversion is concerned, spending her days fighting common-sense laws like voter ID. She even supports ludicrous ideas like pre-clearance, which would require states to get approval from the U.S. Justice Department before they change their election laws. In fact, before her time at the SPLC (when she was at another radical stronghold -- the ACLU) she equated proof of citizenship rules to "voter suppression" and compared voting bans for felons to "slavery." These are safeguards everyone should support -- like making sure only legal voters are voting and they're only voting once. And yet, these are the common-sense rules Abudu has spent her career fighting.

"That organization," Senator Chuck Grassley (R-IA) reminded our listeners on "Washington Watch," "said you were head of a terrorist organization, which maybe speaks to the point about why somebody like Nancy Abudu should not be on the 11th Circuit Court." As Grassley pointed out, the SPLC has a long history of targeting conservatives, and the simple fact that she works for it shows that Abudu has an agenda.

And let's not forget, the court to which she's been nominated has jurisdiction over Alabama (home of the SPLC), Florida, and Georgia. And, like all appellate courts, they're the final stop for 98 percent of cases in America. Very few -- if any -- of her decisions would be taken to the Supreme Court, meaning that she would have a tremendous amount of influence over the most explosive issues of the day -- like voting rights.

"It's extremely dangerous," warned Mary Beth Waddell of my organization, the Family Research Council (FRC). "If she's the one to have the final say over [laws like Georgia's], you could see greater election fraud in certain places if these laws to institute integrity aren't allowed to stand."

A number of organizations like FRC have joined together to sound that alarm, sending a letter to the ranking members of the Senate Judiciary Committee -- Grassley and Senator Richard Durbin (D-IL) -- urging them to oppose Abudu's nomination:

"Ms. Abudu works for a disreputable organization that has no business being a feeder for positions to any judicial office -- not even of a traffic court -- let alone the second highest court system in the United States. She is a political activist not a jurist and is unfit to serve at the federal appellate level."

Unfortunately, Grassley said Tuesday, the Senate is running into this with almost every one of Biden's nominees. That's why Republicans have voiced so much concern these last several months -- voting against more of this president's judges through one year than Barack Obama's:

"[We] want on the court a person who is going to interpret law the way Congress intended it to be written and the Constitution according to original intent....If you want to change the Constitution, you don't have [judges do] it. You amend the Constitution....But when somebody like Nancy Abudu gets on the court...[she may] put [her] personal views into making a decision."

At the end of the day, the fact that she would accept a management role, as we put it, "inside America's largest political defamation factory" tells us all we need to know about Joe Biden's nominee. It ought to automatically disqualify her from any role that requires impartiality. If you agree, join FRC Action in stopping her nomination. Send a message to your senators urging them to vote no on Nancy Abudu.