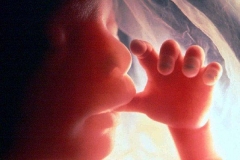 (CNSNews.com) - House Minority Leader Nancy Pelosi would not directly answer today when twice asked at a press briefing the yes-no question of whether an unborn child 20 weeks into pregnancy is a "human being."

CNSNews.com asked: "Is an unborn child 20 weeks into pregnancy a human being?"

Pelosi responded: "You know what, what we're talking about on the floor of the House is something that says politicians should determine what effects the health of a woman, her life, her health, and the rest. I don't think it's up to politicians to do that. And that's why we are very overwhelmingly opposing what is going on on the floor of the House."

A short time later, at the same press  briefing, CNSNews.com followed up on the question.

CNSNews.com asked: "My question is pretty simple. On the abortion issue, I understand your position on the legislation, but even the legislation aside, when it comes to the matter of whether or not an unborn child is a human being at 20 weeks gestation, what is your personal take on it. If it is not a human being, then what do you believe it is?

Pelosi responded: “You know it is really interesting that you would come to these meetings to talk about it. The fact is is what we have said: The life and the health of the mother is what is preeminent in when a decision is made about a woman’s reproductive health. It isn't an ideological fight, it is a personal health issue.

During the press conference Pelosi made clear that she is opposed to both the Pain Capable Unborn Child Protection Act and the No Taxpayer Funding of Abortion and Abortion Insurance Full Disclosure Act.