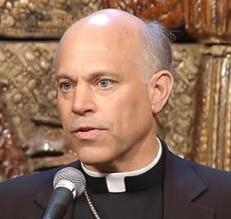 (CNSNews.com) – Responding to statements made by House Minority Leader Nancy Pelosi--who would not say at her press briefing last week if a 20-week-old unborn child is a "human being"--Archbishop Salvatore Cordileone of San Francisco said that it is a “scientific fact that human life begins at conception” and that “no Catholic can dissent in good conscience” from Church teaching on the sanctity of life.

At her Jan. 22 briefing Pelosi said she had "great standing" to speak on the issue of abortion, noting that she was a "Catholic and a mom of five" and asserting that it was "true" she knew "more about having babies than the pope."

CNSNews.com asked Archbishop Cordileone about Pelosi’s comments on human life, particularly in light her self-description “as a Catholic and a mom of five."

"It is a scientific fact that human life begins at conception," the archbishop said in a written statement to CNSNews.com. "This has been established in medical science for over 100 years. Catholic moral teaching acknowledges this scientific fact, and has always affirmed the grave moral evil of taking an innocent human life.

“This has been the consistent teaching of the Church from the very beginning, a teaching already discernible in the natural moral law, and so a teaching from which no Catholic can dissent in good conscience,” he said.

“It is the obligation of pastors of souls to reach out to their people who have difficulty understanding and accepting such important teachings of the Church in order to extend to them true pastoral care and, where appropriate, to establish a regular dialogue,” said Archbishop Cordileone. “This is something I have always striven to do in the various ministries I have exercised as a priest and bishop, including now as the Archbishop of San Francisco. I ask for people’s prayers for success as I continue to strive to do this."

At her Jan. 22 press conference at the Capitol, CNSNews.com twice asked Pelosi whether an unborn child 20 weeks into pregnancy is a human being.

Pelosi would not answer the yes-no question with a yes-no answer, but did say that a woman has "the right" to abort her child.

“The fact is is what we have said: The life and the health of the mother is what is preeminent in when a decision is made about a woman’s reproductive health," said Pelosi, after declining for the second time to say if an unborn child at 20 weeks is a human being. "It isn't an ideological fight, it is a personal health issue.

During the press conference, Pelosi made clear that she is opposed to both the Pain Capable Unborn Child Protection Act and the No Taxpayer Funding of Abortion and Abortion Insurance Full Disclosure Act.