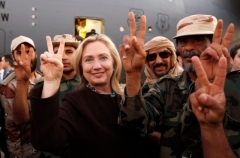 (CNSNews.com) -- Amb. Chris Stevens--murdered by terrorists in Benghazi, Libya on the eleventh anniversary of the 9/11 terrorist attacks—was at the poorly secured State Department facility in that city that day at least in part because Secretary of State Hillary Clinton wanted to convert the department compound there into a permanent outpost and department officials wanted her to be able to announce this was the case when she made a planned visit to Libya in December 2012.

Stevens’ top deputy in Libya, Greg Hicks, made this point in congressional testimony on Wednesday, but it was omitted from the State Department's Accountability Review Board report published in December.

This was despite the fact that Hicks specifically told the ARB that Clinton wanted the Benghazi mission converted into a permanent post.

At a January 26, 2012 town hall meeting with State Department employees, Clinton had indicated she would not remain as secretary of state in a second Obama term. "I think I have made it clear that I will certainly stay on until the president nominates someone and that transition can occur," she said. Given that she was planning to leave the State Department after 2012, a trip to Libya in December of last year to announce that the U.S. had established a permanent diplomatic presence in Benghazi--the city in which the Obama administration had anchored its support for anti-Qaddafi Libyan revolutionaries--could have been a triumphant capstone to Clinton's own diplomatic career.

Amb. Thomas Pickering and Admiral Mike Mullen, the co-chairs of the State Department’s Accountability Review Board that investigated the Benghazi attack--and that omitted from its  public report any mention of Stevens traveling to Benghazi because Clinton wanted to make it a permanent post—have refused requests from the House Oversight and Government Reform Committee to testify in the committee or even speak informally with it.

Hicks, who was the deputy chief of mission at the U.S. Embassy in Tripoli on Sept. 11, 2012 (and thus was second in command to Amb. Chris Stevens), told multiple members at the Wednesday hearing that Clinton’s desire to make Benghazi a permanent State Department facility was one of the motivations for Amb. Stevens' trip there last September.

“Did you tell the Accountability Review Board about Secretary Clinton's interest in establishing a permanent presence in Benghazi?” Rep. Thomas Massie (R.-Ky.) asked Hicks. “Because, ostensibly, wasn't that the reason that the ambassador was going to Benghazi?”

“Yes, I did tell the Accountability Review Board that Secretary Clinton wanted the post made permanent,” said Hicks. “Ambassador Pickering looked surprised. He looked both ways on the--to the members of the board, saying, ‘Does the 7th floor know about this?’ (The secretary of state and other top State Department officials have their offices on the seventh floor of the department's headquarters.)

“And another factor,” Hicks continued in his sworn testimony, “was our understanding that Secretary Clinton intended to visit Tripoli in December.”

“So Pickering was surprised that this was his [Amb. Stevens’] mission was to establish a permanent facility there?” asked Rep. Massie.

“That is your impression?” asked Rep. Massie.

Oversight Chairman Darrell Issa followed up on this exchange to clarify the point.

“I just want you to say it unambiguously--if that's the correct way to say it--without a flaw, one more time,” said Issa. “The reason the ambassador was in Benghazi, at least one of the reasons was x?”

“At least one of the reasons he was in Benghazi was to further the secretary's wish that, that post become a permanent constituent post, and also there, because we understood that the secretary intended to visit Tripoli later in the year,” said Hicks. “We hoped that she would be able to announce to the Libyan people our establishment of a permanent constituent post in Benghazi at that time.”

The State Department Accountability Review Board chaired by Pickering and Mullen omitted any mention of this purpose for Amb. Stevens’ Sept. 11 presence in Benghazi. The report said the ambassador had dinner with the Benghazi city council on the night of Sept. 10, 2012, and had a briefing that day at the Annex, a facility operated by the CIA.

“Ambassador Stevens was scheduled to remain in Benghazi until September 14, and his visit was timed in part to fill the staffing gaps between TDY [temporary duty] principal officers as well as to open an American Corner at a local school and to reconnect with local contacts,” the report also said.

"The Board found that Ambassador Stevens made the decision to travel to Benghazi independently of Washington, per standard practice," said the report. "Timing for his trip was driven in part by commitments in Tripoli, as well as a staffing gap between principal officers in Benghazi."

Oversight Chairman Darrell Issa noted at the beginning of the hearing that Accountability Review Board co-chairman Pickering and Mullen refused to testify to the committee or even informally talk to it.

“On February 22nd, this committee wrote to Ambassador Pickering and Admiral Mullen, who, as required by law, were appointed by Secretary Clinton and co-chair the accountability review board investigation,” said Chairman Issa. “We asked them to testify about their investigation and findings. They refused, and our minority said nothing.

“When we asked Ambassador Pickering and Admiral Mullen to speak with us and our committee informally,” said Issa, “they again refused, and again there was silence by the minority.”

Hicks—who appeared before the committee as a “whistleblower” as opposed to a witness officially sanctioned to appear before Congress by the State Department—repeated to several members questioning him in the committee that one of the reasons Amb. Stevens was in Benghazi on Sept. 11 was because Secretary Clinton was pushing to convert it into a permanent State Department facility.

“Mr. Hicks, why was ambassador Stevens headed to Benghazi? There were a lot of concerns about him,” asked Rep. James Lankford (R.-Okla.). “There were a lot of security issues that Mr. Nordstrom had listed in numerous reports leading up to his trip there. Why was the ambassador headed there?”

“According to [Amb.] Chris [Stevens], Secretary Clinton wanted Benghazi converted into a permanent constituent post,” said Hicks. “Timing for this decision was important. Chris needed to report before September 30th, the end of the fiscal year, on the physical---the political and security environment in Benghazi to support an action memo to convert Benghazi from a temporary facility to a permanent facility.

“In addition, Chris wanted to make a symbolic gesture to the people of Benghazi that the United States stood behind their dream of establishing a new democracy.”

Lankford asked: “What was the time line on trying to make this a permanent facility or was there anything pending that had to be accomplished by a certain deadline?”

“We had funds available that we could, that could be transferred from an account set aside for Iraq and could be dedicated to this purpose,” said Hicks. “They had to be obligated by September 30th.”

“OK. And where did those instructions come from?” asked Lankford.

“This came from the executive office of the Bureau of Near Eastern Affairs,” said Hicks, referring to a division of the main State Department in Washington.

Hicks reiterated his testimony that Amb. Stevens was in Benghazi on Sept. 11, 2012 to work toward making it a permanent State Department post—a mandate he had received from Secretary of State Clinton.

“He went there to do his job,” Hicks told Rep. Tony Cardenas (D.-N.M.). “He felt that he had a political imperative to go to Benghazi and represent the United States there in order to move the project forward to make the Benghazi consulate a permanent constituent post.”

Hicks told Rep. Doug Collins (R.-Ga.) that Secretary Clinton had personally told Amb. Stevens that she wanted him to make Benghazi a permanent State Department post in the discussion she had with him when he departed Washington, D.C., for Tripoli to become ambassador.

“Mr. Hicks I have a question,” said Collins. “It has been asked before, in discussion about a permanent presence in Benghazi give me sort of a quick flavor of what was those discussions like. Would they say, ‘You do this?’ How was that going out?”

Said Hicks: “Chris told me that in his exit interview with the secretary after he was sworn in, the secretary said, ‘We need to make Benghazi a permanent post,’ and Chris said, ‘I'll make it happen.’”

“OK. Was Washington informed of the ambassador's plan to travel to Benghazi?” asked Collins.

“Yes,” said Hicks. “Washington was fully informed that the ambassador was going to Benghazi. We advised them August 22nd or there abouts.”

“Were there concerns raised from that?” asked Collins.

“Given the timing and everything?” asked Collins.

At the same hearing, Republican members asked Hicks and Eric Nordstrom, who had been the regional security officer (the State Department’s top onsite security official) at the U.S. Embassy in Libya until July 26, 2012, whether the State Department;s Benghazi compound, where Amb. Stevens was killed on Sept. 1, 2012, met the department’s Overseas Security Policy Board (OSBP) standards. Nordstrom noted that they did not meet those standards or the standards of the Secure Embassy Construction and Counterterrorism Act of 1999 (SECCA)—and that only Secretary Clinton had the authority to send diplomats to a facility that did not meet the SECCA standards.

“Mr. Hicks, when you arrived in July, did the facilities of Benghazi meet the minimum OSPB security standards set by the State Department?” asked Rep. Lankford.

“According to the Regional Security Officer at the time in Tripoli, John Martinec, they did not,” said Hicks.

“Do you think they were close to meeting the standards?” Rep. Lankford asked Hicks about both the Tripoli embassy and the Benghazi facility.

“Now, Mr. Nordstrom, same thing to you,” said Rep. Gowdy. “And if I'm unfair in my characterization, you need to correct me. I thought I understood your testimony to be that Secretary Clinton alone was able to approve facilities that were below specs.”

“That's correct--part of the specs; certain, certain, there's two categories, SECCA and OSPB. She can--is the only one that can authorize waivers for SECCA. In this case, both apply because we didn't meet either.”

When Clinton visited Libya in October 2011, according to the State Department’s Bureau of Diplomatic Security, the U.S. Defense Department prepositioned assets off the coast of Libya in case it needed to rescue her.