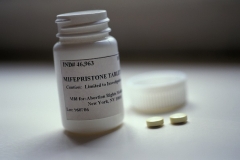 (CNSNews.com) - The United Nations' World Health Organization has added mifepristone and misoprostol, the drug combination that produces a chemical abortion, to its list of "essential medicines," thereby making them more readily available around the world.

The two drugs appear in the latest version of the WHO's essential medicines list. The list of medicines deemed to "satisfy the priority health care needs of the population" is updated every two years.

In recent months groups such as the International Planned Parenthood Federation (IPPF) have been lobbying hard for the decision to go ahead, after reports last April said the Bush administration was trying to block to move.

The British Medical Journal quotes Hans Hogerzeil, secretary of the WHO's essential medicines committee, as saying the inclusion of mifepristone and misoprostol on the list "is a real addition to the therapeutic alternatives for women who have to undergo abortion, especially in developing countries where surgical facilities are less easily available."

While many women in developing countries die from "unsafe" abortions, Hogerzeil said, the WHO was "very confident that these medicines will help prevent such unnecessary and tragic death."

Mifepristone, a synthetic steroid also known as RU-486, is taken orally, followed 48 hours later by misoprostol, taken orally or vaginally. Together, the drugs are reported to be more than 98 percent effective in destroying an unborn child up to two months after conception.

The U.S. Food and Drug Administration in 2000 approved mifepristone, under the trade name Mifeprex, "for the termination of early pregnancy, defined as 49 days or less."

Then late last year, the FDA ordered that labeling on the product be revised, citing "reports of serious bacterial infection, bleeding, ectopic pregnancies that have ruptured, and death."

In the new WHO essential medicines list, the mifepristone and misoprostol combination is listed with a note that their use "requires close medical supervision." The entry is also accompanied by a condition: "Where permitted under national law and where culturally acceptable."

Responding to the WHO decision, a spokeswoman for the Society for the Protection of Unborn Children said: "Perhaps WHO could explain how encouraging DIY (do-it-yourself) abortions constitutes a 'therapeutic" answer to women facing crisis pregnancies?"

"It is a scandal that drugs that will end innocent lives and put women at risk have been added to the WHO list of 'essential' drugs whilst an antiretroviral drug to treat AIDS has not been added," she said.

Last April, Britain's leftwing Guardian newspaper reported that the U.S. Department of Health and Human Services was trying to prevent the WHO from adding the two drugs to the list "in line with President George Bush's neoconservative stance on abortion.""

It said that as a result, the publication of the revised list had been subject to an unusual delay, more than two months after a WHO expert committee had recommended they be added.

The IPPF's Western Hemisphere Region then launched a petition drive aimed at WHO Director-General Dr. Lee Jong-Wook, asking him to end the delay on approving what it called "safe and effective drugs."

Now that the new list has been published, the IPPF wants supporters to write to thank Lee, but also to complain to him about warnings accompanying the drugs.

"I'm concerned that this inconsistency is the result of the pressure the WHO has received from the U.S. government," the IPPF suggests supporters write to the agency's head.

"The Bush administration's bullying is ideologically-driven and does not reflect medical or scientific fact or reality. I urge you to remain true to your mission as a health organization and remove these unnecessary warnings."

"Abortion is certainly not a priority health care need, and these drugs absolutely do not belong on the list," Perkins said.

Adding them would "not only morally and ethically unacceptable, but also scientifically irresponsible," he said, noting that "very serious health risks attend use of these abortifacients."

The new WHO list, the 14th edition since the first one was published in 1977, names more than 300 drugs.

Send a Letter to the Editor about this article.