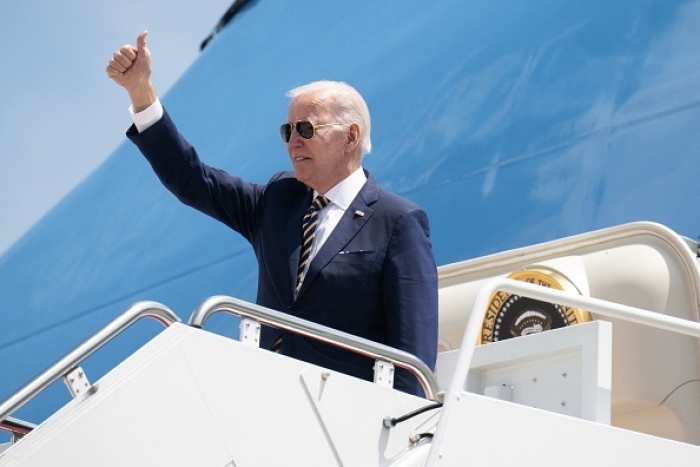 President Biden boards Air Force One at Joint Base Andrews, Md. on Thursday before leaving on his first Asia trip as president. (Photo by Saul Loeb/AFP via Getty Images)

(CNSNews.com) – The administration is prepared for the possibility that Kim Jong Un could carry out a nuclear or ballistic missile test during President Biden’s first visit to the region as president, National Security Advisor Jake Sullivan told reporters Thursday as Air Force One headed for the Korean peninsula.

“There is a genuine possibility, real risk of some kind of provocation while we’re in the region, whether in South Korea or in Japan,” Sullivan said, adding that this could take the form of a nuclear test or another missile test.

“We are prepared for those eventualities, we are coordinated closely with both the ROK [South Korea] and Japan,” he said, according to a White House recording of the in-flight briefing. “We know what we will do to respond to them.”

Sullivan said another nuclear or missile test “would cause the United States only to increase our fortitude in terms of defending our allies and cause adjustments to the way that our military is postured in the region.”

He said the U.S. has been in communication with its allies and also with China in this regard.

Ahead of the trip, Sullivan spoke by phone with the Chinese Communist Party’s top foreign affairs official, Yang Jiechi.

“I was quite direct with him about our concerns about North Korea’s nuclear/missile activities and our view that this not in China’s interests,” Sullivan said, adding that he urged China to consider taking whatever steps it could “to reduce the possibility of a provocative North Korean act.”

China has historically been North Korea’s closest ally and its evident reluctance to use its leverage to bring about a change of direction in Pyongyang has long frustrated U.S. administrations.

Should the Stalinist regime carry out a nuclear test it would be its first since 2017, and the seventh since it conducted the first one in 2006. It would come weeks after Kim suggested in a speech that the regime could use its nuclear weapons preemptively “if any forces try to violate the fundamental interests of our state.”

A ballistic missile test during Biden’s trip would come in the wake of a dozen launches since the beginning of this year, the most troubling of which was a test in March of Kim’s newest intercontinental ballistic missile, the Hwasong-17.

It was also reported that the country’s intelligence agency had informed lawmakers in a closed-door briefing that preparations for another nuclear test in the North were virtually complete.

Biden and Yoon are scheduled to hold a summit in Seoul on Saturday, local time.

Yoon, a conservative who took office just ten days ago, has vowed to take a more hawkish stand on the North, and has called on the U.S. to deploy more “strategic assets” in the region.

South Korea and Japan, both U.S. treaty allies, are the countries most directly threatened by North Korea’s weapons programs. The U.S. has worked closely with both for decades in ultimately unsuccessful attempts to resolve the nuclear standoff with Pyongyang.

Sullivan said that if North Korea did take provocative action during Biden’s visit to the region “it would underscore one of the main messages that we are sending on this trip, which is that the United States is here for our allies and partners.”

“We are here to help provide deterrence and defense for the ROK and Japan. We will respond to any threats and any aggression decisively.”

Biden will not visit the demilitarized zone between the two Koreas during his visit. Sullivan put that down not to it being “too dangerous,” but because Biden – who visited the DMZ as vice president in 2013 – preferred not to repeat that, but would rather visit an air base where U.S. and South Korean forces are operating together. 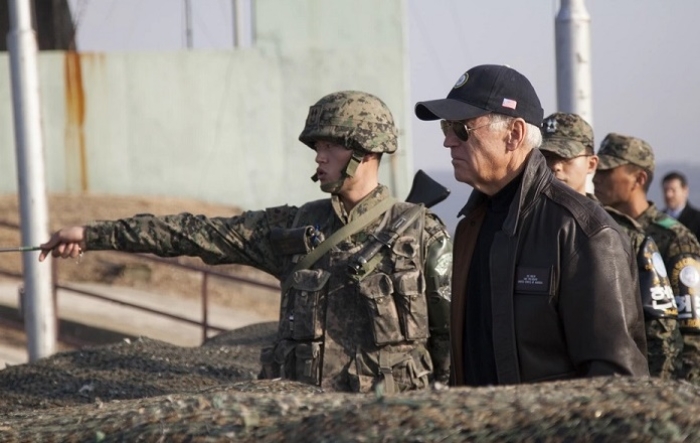 The Hwasong-17 launch in March was the regime’s first successful ICBM test since 2017, and came after Kim abandoned a moratorium on long-range launches that he declared on the eve of his June 2018 summit in Singapore with President Trump.

Four years on, diplomacy between Pyongyang and Washington remains at a virtual standstill.

Sullivan said Thursday that since Biden took office the administration has “reached out to North Korea to say that we are prepared to sit down and talk without preconditions, to discuss a pathway forward to make progress toward the ultimate goal of the denuclearization of the Korean peninsula.”

The regime had to date not indicated any willingness to engage in “meaningful or constructive diplomacy” however.

“And as long as they continue to refuse to do so we’ll continue to stay on the course we’re on, which is to impose pressure, to coordinate closer with our allies and to respond to provocations with clarity and decisiveness.”

After claiming to have largely shut COVID-19 out while the virus swept across the rest of the world, the regime admitted its first outbreak earlier this month and in recent days reported that almost two million people had become “ill with fever” since late April.

Whether the crisis impacts any potential weapons tests remains to be seen, although State Department spokesman Ned Price earlier this week voiced skepticism.

“We have never seen the [North Korean] regime prioritize the humanitarian concerns of their own people over these destabilizing programs that pose a threat to peace and security in the Indo-Pacific and beyond, so I do not think there is any expectation of that,” he said.

Pyongyang has thus far refused to accept any COVID-19 vaccines or medical goods from South Korea, and has not taken up offers of donated vaccines from COVAX, the international program aimed at providing them to low-income countries.