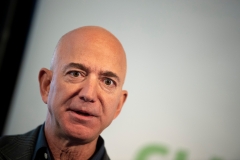 “I am going to acknowledge that this is an imperfect system and, uh, I would love suggestions on better or additional sources…” – Jeff Bezos, Amazon CEO

The conviction that all Americans have an inherent right to live and work peacefully according to their deeply held beliefs seems to be in short supply.

Students are silenced for practicing their First Amendment rights on public college campuses, merely because they hold religious beliefs that aren’t popular. Business owners are barred from the marketplace for publicly expressing their views about marriage and family. Professors are threatened by college officials for refusing to endorse ideologies that conflict with their consciences. Twitter mobs coerce public condemnation and cancellation.

This is no recipe for a tolerant society.

Even large corporations, which proclaim tolerance as a goal, fail to provide an environment where a wide range of diverse viewpoints can flourish.

For example, take Amazon, which employs the Southern Poverty Law Center’s “hate group” list to decide which organizations can participate in its AmazonSmile charity program.

While the SPLC claims to be a defender of tolerance, it’s actually the exact opposite.

Once an organization that furthered civil rights, the far-left SPLC now seeks to completely destroy any group or individual committed to beliefs that dissent from the SPLC’s ideological agenda. The SPLC does this by lumping peaceful groups that advocate for mainstream Christian principles in with truly despicable groups such as the Ku Klux Klan on its “hate group” list.

And that is the list that Amazon relies on.

This is an ineffective, discriminatory method of determining who should benefit from consumer-earmarked giving, far from perfect—to say the least.

And now, even Jeff Bezos seems to think so.

“I am not here accusing you as someone who would ever traffic in hate,” Gaetz told Bezos. “But it seems you have empowered people who do, and I’m particularly talking about the Southern Poverty Law Center…I'm just wondering why you would place your confidence in a group that seems to be so out of step and seems to take mainstream Christian doctrine and label it as hate?"

“I am going to acknowledge that this is an imperfect system and, uh, I would love suggestions on better or additional sources…” Bezos admitted.

Later on, Gaetz once again highlighted the SPLC’s discrimination against religious groups, pointing out that they even labeled Dr. Ben Carson an “extremist.”

“I want you to hopefully appreciate when we’re trying to make it possible for people to donate to any number of a million different charities, and we need to have some source of data to use,” Bezos responded. “And while I accept what you’re saying that the Southern Poverty Law Center and U.S. Foreign Assets Office are not perfect, and I would like a better source if we could get it, that is what we use today.”

Amazon’s dependence on the SPLC’s abysmal judgment should end, and not just for their customers’ sake. By devaluing viewpoints which many of Amazon’s customers do value, Amazon shoots itself in the foot. It’s in Amazon’s best interest to demonstrate that it won’t alienate any constituency or be driven by ideology. Viewpoint diversity within corporations keeps them competitively sharp and helps prevent the marketplace from becoming one more cultural battleground.

The recent antitrust hearing revealed that we need a commitment to viewpoint diversity. Supporting every person’s right to speak freely ensures robust debate and open, civil discourse—for everyone.

So, when the world’s largest online marketplace decides to treat people with diverse opinions as second-class citizens, change should be demanded. Amazon should live up to their claims of being “inclusive” and “diverse” and abandon the SPLC’s smear campaign.

What You Can Do

Are you an Amazon customer or investor? Your voice is important! You can stand up to the SPLC’s control of AmazonSmile quickly and easily by signing this petition today.